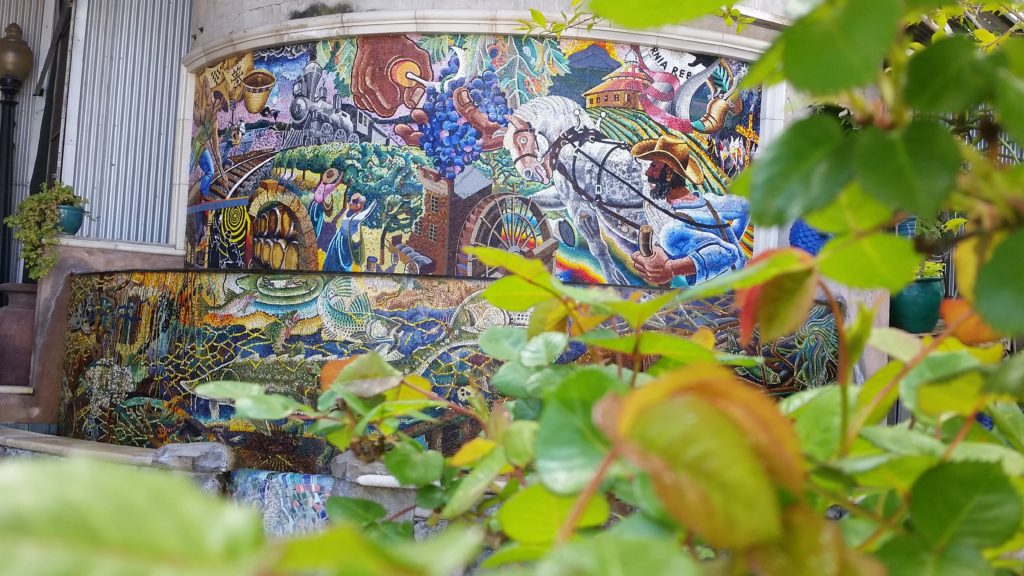 Alan Shepp’s mosaic fountain is an artistic rendition of the Napa Valley’s role in the epic of the American West. The work of art seeks to capture the essence of the whole Napa Valley story, its glories, and its tragedies.

(Life is Brief But Art Endures)

The stunning Ars Longa Vita Brevis (Life is Brief But Art Endures) draws visitors from around the world. The fountain’s vibrant vitreous-glass mosaic illustrates the history of Napa County, from homesteaders and plows bringing fruit to market to the Hispanic, American, and Chinese laborers key to the area’s development.

A beautiful glass waterfall tumbles over images of the Napa River’s inhabitants, including salmon, turtles, a beaver, and sunken boats. Tiles known as “The Living River” flow from the fountain throughout the plaza.

The fountain is particularly spectacular at night when the tiles twinkle with reflective light and give it a completely different look than daylight does. Day or night, it makes for a lovely stop along the Napa River Trail – the perfect place to see some of the flora and fauna depicted in the fountain.

The mosaic captures “The Glories” of the Valley’s development, from the days of the Nappa Indians through the Spanish conquest, and on to the eras of Mexican and American domination. The development of agriculture featured at different times, cattle, wheat, prunes, grapes, and wines, brought to market by horse, train, and boat. The Hispanic, American, and Chinese communities all played vital roles in this development. These glories survive in our institutions, laws, culture, and historic buildings.

The “Tragedies” include the elimination of the Nappa tribe of Wintum Indians by smallpox and harassment. Actions of some residents led to the burning of Napa’s Chinatown and support of Klu Klux Klan measures directed against African-American, Chinese, Catholic, and Jewish peoples. These tragedies lie forgotten in dusty books.

“No matter how hard you try, you cannot expunge the past of painful and reprehensible acts by destroying the histories, memoirs, and art wrung from the tears of a society. You can only elevate the future by educating and exposing wrongdoing to the eyes of a willing people.

This depiction is not an endorsement, this portrayal is not to sanction the action of bullies, but instead to stand as a reminder that we must remember the past, accurately and without a tendency to whitewash.” — Harry Price

Request a brochure from the Inn’s reservation desk in the lobby for a detailed description of the glories and tragedies depicted.

Local multimedia artist Alan Shepp creates large-scale sculpture and public art that has been exhibited from Italy to Singapore, Egypt, England, Israel, and throughout the U.S. Shepp’s commissions can be found in many northern California locales. He and his wife Diane, also an artist, keep their studio right in Napa.